As most of you would have known, I hail from Malaysia, a country in Southeast Asia. I am in my 20s. For as long as I can remember, I have a special affection for firearms, no small part thanks to my interest in anything related to the military. I have been collecting toy firearms (from brands such as NERF and cheap BB guns to the more pricey Tokyo Marui airsoft guns) for some time. However, being a closet firearms enthusiast in Malaysia is pretty much ignored, frowned upon, or both (depending on who you ask). Some would share my interest and joy. Some would be fascinated by it. Others would give that "really?" look. However, all of this is based on my experience; it varies from person to person.

How I Chanced upon PMG and the PMG Wiki

It all began in 2013, I came across RWBY, an American web series. Among the main highlights of the series was its vast array of weapons, most being a melee weapon combined with a firearm functionality; a gunblade knife-gun pistol sword, whichever you would call it. I was searching on the 'Net for a site to create my own weapon just like in RWBY when I stumbled upon the Pimp My Gun site in June 2014, 2 years after it was last updated. Needless to say, I was immediately hooked. Since then, I have created so many weapons that I myself was surprised. However, I stumbled upon this wiki only recently. The moment I did, I was honestly taken aback by the sheer greatness of some of the weapon designs. I've never felt more small upon comparing my designs to the said designs. However, by the time I discovered this site, I fear that I might have been too late; that this site remained dormant and stagnant for a long time. However, I am thankful for some users that keep this site running day by day.

Of Presets, Creativity, and Whatnot

I know that presets are, more often than not, frowned upon and, needless to say, boring. That's why I try to diversify my designs. However, we have no right to condemn or bash those who solely design their weapons solely by preset. I know that some of us are trying to draw creativity from within others; the intention is there, but not everyone possess the creativity that some of us do. I, too, preset most of my guns, although I draw inspirations from many places (some of them from this site) and implement them into my design. I'll be frank, most of my designs are inferior anyway, but the excitement that I got from building these weapons is incredible. I do realise that PMG has its own page on Facebook, Flickr, etc. for people to display their creations, but as I said, not all of us are on par with them.

Forgive me if my user page seems more of a rambling rather than a description of who I am. I just need to let it off my chest. I'm really sorry if I had offended anyone in any way at all.

That said, let's get building and let's have fun! 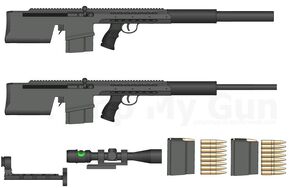 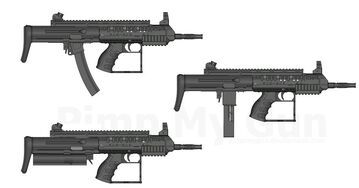 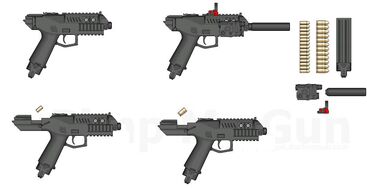 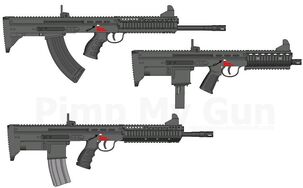 Born to a family of 3 siblings on the 5th of August 1993, Ahmad Syahir (often called by his name, Syahir) was a child like any other. Already able to crawl, walk, and run by the age of 2, he began to read by 3 years old. He attended kindergarten for 3 years beginning at the age of 4. Teachers and former classmates recalled Syahir as being very curious, cheerful, but a bit mischevious. (A minor incident occured when Syahir was 6, when he went missing during a field trip to the National Stadium. After a 1-hour search, he was found loitering near the exit. Consequently, a thorough lecture and a pinch to his left arm by his teacher followed.)

At 7 years old, he attended the Seri Selangor Primary School, where he would remain for the next 6 years. His academic achievements can best be described as normal, without any notable achievement to speak of. However, he represented his sports group rather well, representing the group's shot put and tug-of-war teams, respectively. He was known to be a cheerful, kind-hearted, chatty, and witty. However, his most known trait was being a pacifist, breaking up fights between students as a result of being a prefect during his last 3 years.

He began his secondary education at the USJ 4 Secondary School beginning at the age of 13, where he would remain until he is 17. It was also during this time, at the age of 14, that he lost his father after a heart operation. Again, his education can be described as expectable. He carried his traits from his adolescent times, being recognised by almost anyone in the school. Consequently, he acquired the nickname of Father, which alluded to his father-figure traits among his classmates and teachers. It was during this time that his love for firearms began to sprout, bit by bit.

In 2011, at the age of 18, he was selected to attend the National Service Training Programme, a 3-month national service camp. It was here that he fired his first firearm, an M16A1. At 19 years old, he enrolled in an undisclosed defence university in Kuala Lumpur to study Weapons Engineering and Defence Tactics and Implementation. Upon turning 21, he travelled to Poland to further his studies and explore the potential firearms matters there. He spent a year there. It was here that fate met him with Dr. Pawel Nowak, a professor at the National Defence University of Warsaw. The two then decided to share their knowledge on firearms design and implementation and to establish their own company, NS Arms Corporation.

At the beginning of establishment, aside from Syahir and Prof. Nowak, there were only 30 workers, a single warehouse, and a small office building. All of the workers coming from Prof. Nowak's social circle (his immediate family members and closest relatives). Their early works were focused mainly on the maintenance and refurbishing of weapons. Over the coming months, the company grew in numbers. By the final quarter of 2014, word had spread that NS Arms Corporation required more manpower and funding. In response, more than 200 workers were employed and the fund raised by the general public were enough for the company to purchase a land to expand their operations. Another warehouse was added, with more weapons machine were added. Additionally, a residential quarters area were built for the workers who reside far away from the factory. Besides that, the office building was enlarged to accommodate various departments and to handle orders more efficiently.

Over time, the company's workforce grew in numbers. At present, the company employs close to 500 workers. A second factory and a branch office was established in Syahir's hometown of Subang Jaya in the state of Selangor, Malaysia. Throughout the years, the company has accepted many tenders and contracts from various agencies and governments.

They have since produced various weapon types such as pistols, an SMG, a shotgun, a battle/designated marksman rifle, grenade launchers, a mortar, a bolt-action sniper rifle, a squad support weapon, anti-materiel weapons, and some knives.