Clicker Defense is a firearms company debuting on July 4, 2015 (Independence Day of the United States) with the C128. They deal in civilian, police, and military operations. The company was founded by Tom Clicker. It is headquartered in Florida. The company is known for its ambidextrous controls, although Tom himself is right-handed. Clicker is known for their recoil mechanism, unique weapons, and other aspects as well. The company is currently thinking about expanding to other locations. Clicker has a video game division which holds a video game industry in California named Kezk Studios.

Clicker Defense's first product was the C128 Weapons System. It revolutionized the world with its great build quality, performance, or everything in general. Currently the business has been expanded into other places as well, such as Clicker Aerospace, and the aforementioned Kezk Studios. The current project is the F36 Fighter Jet. 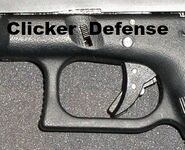 Current Logo 7/30/2017 - Present
Add a photo to this gallery
Retrieved from "https://pimpmyguncreations.fandom.com/wiki/Clicker_Defense?oldid=52984"
Community content is available under CC-BY-SA unless otherwise noted.