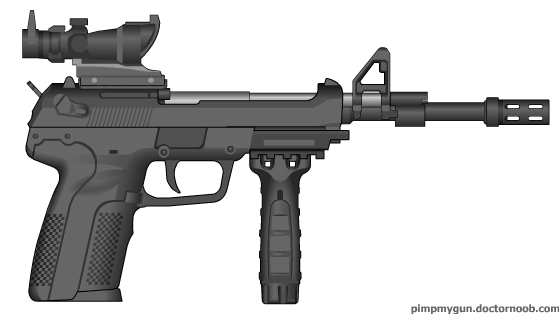 The .45 S-ATPS ( Semi-Automatic Pistol System .45 calibre) is an semi-automatic pistol chambered in .45 ACP. It features a top and bottom rail for grips, red dots, flashlights etc.

The most interesting feature of this pistol in the operating system, as explained below.

This pistol is widely used for training, target shooting and military use. Because of it's reliability, modular rail system and integrated flash hider and low recoil, this is an ideal secondary weapon.

When you shoot the gun, the expanding gasses are caught in a gas tube (silver/grey in the photo), which then drives a gas piston (as found in an AK or M4/M16). This rod then drives back the hammer, and operates the bolt so the next bullet is chambered. In this way, it can fire fully automatic or semi-automatic without high recoil.

In this picture, you can see the operating system: The bullet is loaded (the bolt, that small lever behind the bullet, is forward and the hammer is cocked) When you pull the trigger, the hammer moves forward, striking the ignition cap and firing the bullet. When the bullet passes the front sight, the gasses are partly moved back through the gas tube (the 2 grey rods on the right) and these drive back the piston rod (the other grey tube on the left) which pushes back the hammer, and chambers the next bullet. Spent casings are ejected on the left side of this pistol.

Retrieved from "https://pimpmyguncreations.fandom.com/wiki/.45_S-ATPS?oldid=32900"
Community content is available under CC-BY-SA unless otherwise noted.